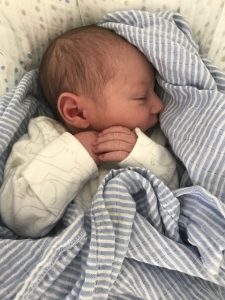 It wasn’t smooth sailing though. At my 41-week appointment, the midwife noticed that his heart rate was spiking which could indicate distress. I was sent off for a walk to see if he’d calm down over the next few hours. Conveniently, UCH is situated in central London so after a few hours in Selfridges, we headed back to be put back onto the heart rate monitor.  It wasn’t the news we wanted; his heart rate was still spiking and as he was overdue the midwife suggested they induce me, which made me cry. A bit of background; two years ago I gave birth to my little boy Leo in the Natural Birth Centre at UCH where I used the birthing pool. It was calm and empowering and I envisioned a similar second birth. From what I’d heard, drugs and inductions often ended up in a C-section, which terrified me. Funny that most people are scared of pushing a baby out of their vagina while the thought of a big op terrifies me more.

As if my baby could hear my panic, I started to have contractions.  I hoped that this would mean the induction would be put off but his heart rate continued to spike higher with every contraction and the doctor assured me it would best for my baby to get him out asap.  He obviously wasn’t so happy anymore so I agreed to start the induction process in the hope that it would speed things along.

They say induction can take days. At 5pm she inserted the pessary. This may be TMI, although if you’re reading this then you’re clearly into birth stories so you should be expecting it, but a pessary is a bit like a tampon containing hormone-like drugs that the midwife inserts in order to soften the cervix and kickstart contractions. Because my contractions had already started, this was to speed things up. After another hour monitoring his heart rate, we were sent out for a walk. It was 6.30pm on a Friday night in January so we headed to Franco Manca on Tottenham Court Road for a causal contracting dinner. One margherita pizza down and one aborted casual stroll  – I wouldn’t recommend contracting in the middle of the post-work crowds on a busy, boozy, Friday night – we chose the warmth of the ward and the Celebrity Big Brother eviction instead. As I was happily bouncing on a ball, eating Haribo and watching Emma Willis do her thing, the contractions started to intensify so I sent my husband to ask for some paracetamol from the midwife. Thirty minutes later, he called for her again (the intensity of my hand squeezing had apparently ramped up a notch) and she grudgingly examined me (remember I said that inductions take days. Or not.) Suddenly panicked, she pulled out the pessary and called labour ward. I was 5cm dilated [established labour is 4cm] and suddenly I was on a wheel chair heading for the labour ward.

11pm: I arrived at my delivery room and met Shelley-Anne, my midwife who told me, “this is exciting, you’ll meet your baby in the next 12 hours.”  Because his heart rate was still spiking I was hooked up to a drip. Not the comfiest when your body is contracting every minute or so.  Here is where I lost track of time, my head was going with my body and it had only been what felt a few minutes but suddenly I was begging Nick to go and get Shelley-Anne, my whole body was shaking (this is the adrenalin) and I felt like I needed to push. Shelley-Anne told me to do whatever I needed to do. This was so different to my last birth, I didn’t need to think about anything, my body was doing it all on its own. I had a sudden rush of energy, my body took over and within a few pushes, my baby boy was out. Those newborn wails as your baby takes his first breath are the most amazing sound any mother could hope to hear, as was the warmth of his little soft body as he was placed onto my chest. 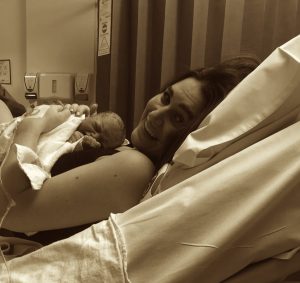 Alfie Gray Silver was born at 12:40am on 20th January. One hour and 40 minutes after we arrived at the labour ward. Fast, intense and brutal is how my husband described it. Like Speedy Gonzalez on crack is how Shelley Anne described it.  The best kind of shock is how I describe it.